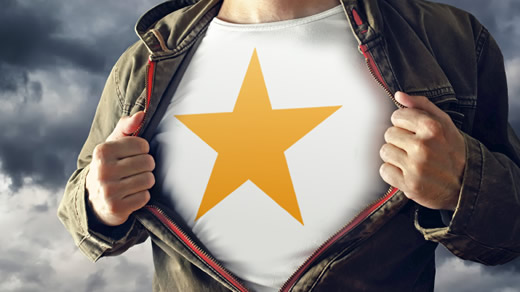 I work with people who are awesome.

This isn't hard to do, by the way, as everyone is awesome.

Admittedly, there's a bit more to it when doing my Thing as I help package up the awesome, market and sell the awesome and have a great message and story around the awesome.

But I can't do anything or help anyone really until they are being their awesome. And it's harder than it sounds. I mean, are YOU being all of your awesome?

Not easy to do if, like me, you are very shy and retiring **coughs**—but seriously, even though I am no wallflower even accepting a compliment can be hard (it takes a lot of effort for me to just say "Thank you" to a compliment and not turn it into a comedy sketch which is my defence mechanism—if ever in an awkward situation I go for the default 'make 'em laugh' option).

Seeing everything you've done as awesome doesn't always make sense when you've walked away from jobs and markets and clients that you didn't enjoy. Owning your awesome when you've made a BIG change in what you do can be daunting, as your awesome before may have had a framework around and a hierarchy or system that everybody 'knew' (think any job you've ever had).

Diving off the cliff of corporate or paid employment into doing your own Thing very often leads us to question our awesomeness or even lose sight of it all together. Sometimes we think we have to work out a whole new awesomeness as we left 'that' behind. Not true. You take your awesome with you everywhere you go and there is always a thread that passes from place to place and project to project with you throughout your life.  And I get that sometimes those 'not so great' situations sometimes make that hard to see (or you are highly sceptical of their value!), but a lesson is a lesson and your awesome is your awesome.

Don't leave anything out.

We want you to be ALL your awesome.

And, of course, if you don't own your awesome no-one else is going to take it seriously. It's hard to sell your Thing when you don't believe in your own awesome. You need to see everything and know it's what makes you you. In all your awesome glory.

And my job? Well, mostly I just reflect back the awesome you ignore or file under 'not important'. There's always plenty more awesome that you're letting on. I know to be true.

Why blog for your business?

So why am I blogging, and should you blog for your business? And if you are blogging, is it helping?! Blogging is something that can be a very effective part of your marketing. It’s not always sensible to blog in the ‘traditional’ sense of a diary though, as if you’re not doing anything interesting day-to-day then you might not get value from it!

There’s something about marketing that many people don’t like. And that’s doing it too much.

There’s nothing that sends people into a bit of a panic more than when is enough enough? how many is too many times? and what if I’m being annoying?

I was talking the other day with a client about ideal clients (as I always do!) and was asked in return what my ideal client is. And my answer surprised me as it was so simple – I said my ideal client has to be willing.

Knowing that you want to do more, or grow, or change direction is enough – the only other thing you need is willingness. Fear is bound to come up as new and different things can be scary (I am scared all the time) BUT the way to overcome fear is tackle it head on – so you need to be willing to do this!

Marketing is for life… not just for Christmas

You might be forgiven for thinking that some people only market their Thing on special occasions like Christmas as that’s when you hear from them for the first time in ages. They may pop up with alarming regularity at seasonal events and then fade away in between. But consistency is the key—show up every week, regardless of the season.

Is there ever a right time to do your Thing? Not sure on that one. But what I do know is if you’re not doing your Thing yet it’s only going to continue to piss you off ’til you start doing it!

Now, I am NOT saying you need to drop everything and start doing your Thing now–that’s hardly ever the best plan. But what I am saying is that it’s pretty likely that there will come a time where you will have to take a leap of faith into doing your Thing and how big a leap and how much of a safety net (or not!) you have is entirely up to you.