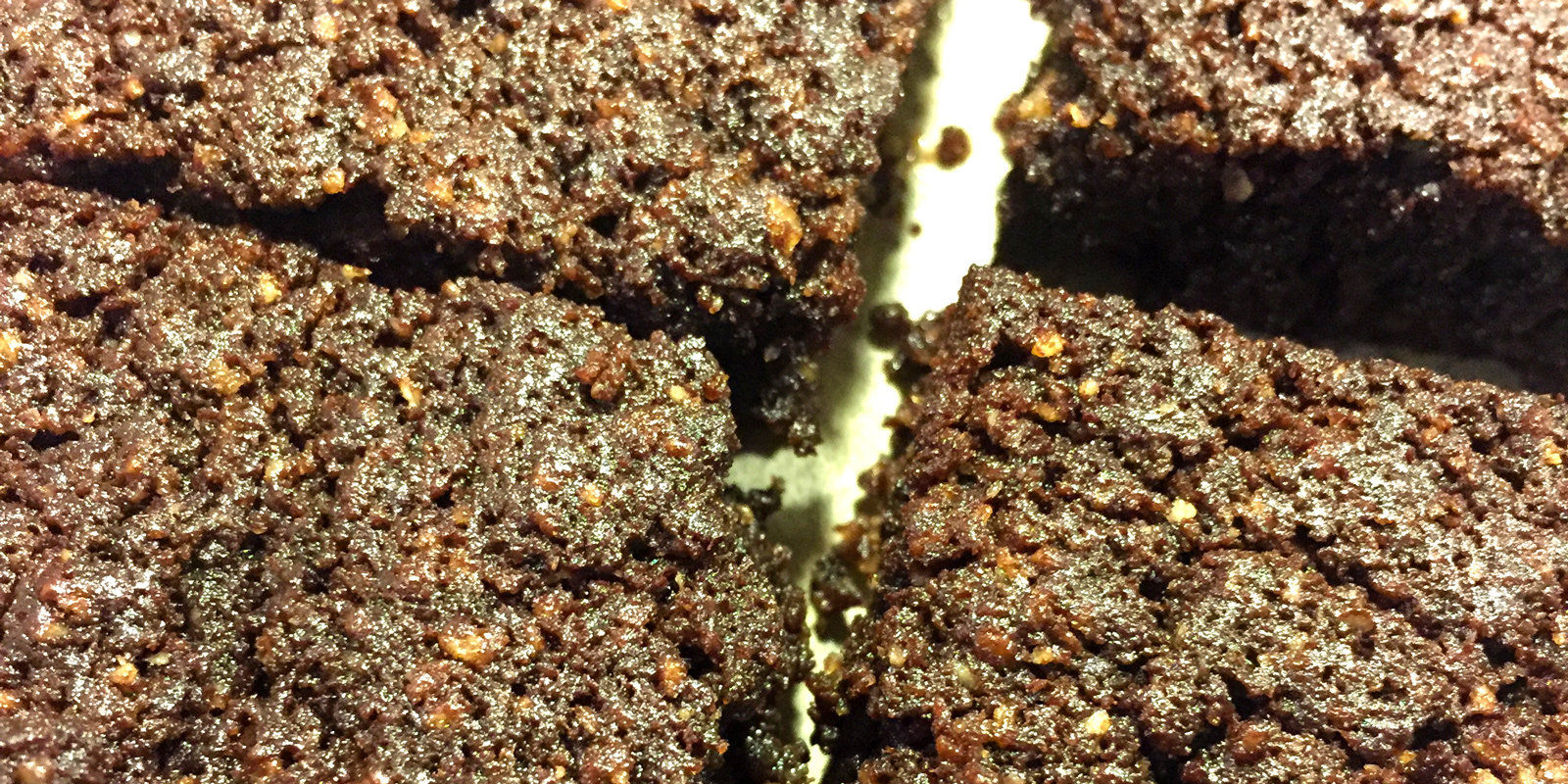 Much as I would love them to request raw veg and seeds, sometimes the small people want cake. And, specifically, last weekend they wanted brownies. So I of course had to oblige (nothing to do with me wanting to eat any, of course **coughs**). I don’t have a go-to brownie recipe in my head so I dug out my cookbooks–which are a rather eclectic selection I have to admit–and compared recipes.

There was a Paul Hollywood option (he of blue twinkly eyes Bake Off fame), a Gordon Ramsey option, a Nigella option and (showing my age now) a Delia Smith option. And they were all recipes for the ‘same Thing’: brownies. I knew if I followed any of the recipes, I would end up with the requested gooey slices of chocolate foodstuff. BUT the recipes were not the same. Some had more eggs than others, different amounts of sugar and flour, the type of chocolate to be used, and each had there own ‘extra bit’ to add (walnuts, cranberries, etc.). So I had to make a choice.

How I made my choice was entirely down to my own preferences and how I ‘responded’ to the recipes (along with what I knew about the author of them).

I went for the Nigella option.

My reasons: first off, hers was flourless (almonds instead) so I knew I could scoff loads of them (I don’t get on well with flour). She had a luscious picture of her brownies, too, in the cookbook that had me very keen to make them. And if I’m going to take advice from anyone on gooey chocolatey treats, then Nigella is clearly the go-to person to consult, as we know she loves her treats. That’s not to say the other recipe authors aren’t brilliant at their Thing (they are all amazing chefs/cooks), BUT in this instance–where gooey chocolatey decadence was in demand–I reckoned Nigella would be the best judge.

And this is exactly the same with your Thing

You may well offer something that lots of other people do. You know your recipe will give a result they can also get to a number of other different ways, from different people or other businesses. So what you have at your disposal to make you different is: your own take on it (what’s your ‘extra bit’ you add, or what do you leave out or replace?). You also have you. What do we know about you, how did you work out your recipe? What’s important to you, what do you notice, and what do you stand for? I wasn’t bothered about the ‘perfect bake’ (I’d have gone with Paul Hollywood for that), nor was I after a Michelin-star-worthy brownie (Mr Ramsey for that) and, whilst I am sure Delia’s brownies were amazing, she didn’t talk to me in luscious language that had me melting my 74% chocolate right away (Nigella did that!).

I have no doubt whatever option I had chosen, the brownies would have been eaten as they ‘met the brief’, but how I chose ('bought' in the case of your Thing) was down to what I knew about the person who’d presented the recipe. Something to think about... over a brownie?

PS. There was actually another option which was to walk to the end of the road and buy brownies from the award-winning baker's which, frankly, I will do next time **would have been quicker**–the note there being: don’t dismiss a ‘done for you’ option with your Thing!

You wouldn’t serve a bowl of chips

It’s the ‘best dress in the shop window’ scenario, it’s the ‘fire the big guns first’ option. Don’t offer tasters of anything less than what you do that’s brilliant when you’re faced with hungry potential customers. Serve them a little bit of your steak not a bowl of chips.

Tell it how it is – When being serious makes the difference

The tone of your messages and your marketing means so much. If you want to get heard try a different tone now & then to hit home. There is always a time when you need to tell it how it is.

Is this really me?

Do you ever do something or write something or have a meeting about a project and think ‘is this really me?’.

There are lots of things you CAN do but not necessarily all of them ARE you.

When you are really being you, you are being brilliant.

And you are being brilliant with ease and grace and fun.

If you have that sinking feeling when you look at some copy or design or a proposal that is ‘from’ you and it’s just not feeling right, then heads up – it’s not really you.

What I didn’t learn at business school (but know now!)

While I did learn a LOT of theory and case studies of big business, and if required I can write out a cashflow forecast and balance sheet by hand, what I didn’t learn was any of the actual practical ‘stuff’ that business owners—especially small owner managing solopreneurs like many of us doing our Thing actually need to know.

Did you file it under ‘Common Sense’?

When you know something and know it so well, you can’t quite believe other people don’t know it. Sometimes this is ‘learned’ knowledge–a new topic you just took a course in, or a book you just read. And sometimes it’s something you ‘filed away from years ago’. Other times, it’s just something you figured out was ‘common sense’. The problem with common sense, though, is everyone’s file contains different entries.

When clarity is everything

I get like this–when I can’t ‘see’ clearly, I stall. Sometimes it’s what to do next, sometimes it’s a name of programme, or a venue, or a price, or a marketing message. It could be big barrier or it could be a small stumbling block, but if I can’t see clearly ‘what’ or ‘how’, I can get stuck.