The pushmi-pullyu of marketing 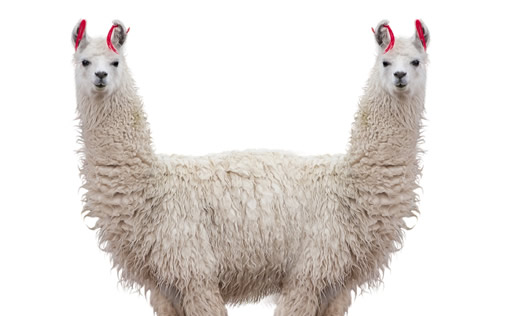 If you're not a Doctor Dolittle fan you'll not get the title, so here's a quick heads-up on that—two heads, in fact. A pushmi-pullyu (pronounced "push-me—pull-you") is a creature—llama-like, if I remember rightly—that has two heads which face in opposite directions (so it has two front halves each looking away from each other, but joined in the middle). Am sure the picture explains it better :)

Of course, the inherent problem that a pushmi-pullyu has is that both heads want to walk forwards. But of course for the creature to get anywhere it needs to sometimes allow one head to go forward and the other to walk backwards. It needs to take it in turns to lead to get anywhere (otherwise it's not only going to get nowhere but probably hurt itself in the process! Ouch).

So what's this got to do with marketing?

Good question, and if you're asking it then you may not realise you have another head to consider. Because of course it's not just you that's part of your marketing—there's also the person you're marketing to. And if you think about them as your other head (bear with me!) you'll know that to get anywhere you will sometimes need to follow and not lead.

How does this look in business?

When you've been making offers constantly and having sales conversations that all head in one direction—towards your solution—without allowing the person you're speaking to take a step themselves. Selling isn't a one-way street—it's a two-way conversation and you need to allow the person you're speaking with walk towards what they want too. This way you'll know you have a committed client on your hands as they have 'led the way' to what you offer.

If you're constantly marketing your solution as 'the only way' or 'what you need' you're making your prospects walk backwards a lot, and while they might end up where they want to, they may feel a little 'backed into it' if you'll pardon the pun.

It does make sense to lead BUT...

When you've led your prospect to the place where they 'see' they need some help, or would like assistance, or totally get that a product or service is what they need right now, then you can allow them to lead so they walk towards what it is that they want. This is when you walk backwards with them (if you're still following the 'two heads' analogy).

If you are constantly marching forwards with your marketing, and there's no 'thinking' space or 'feeling' space where someone can make a decision that suits them and, worse still, they feel like they're being led blind in a direction they don't want to, that's when your sales will suffer. Take people to a place where they can look around and walk forward confidently and you'll stop 'pushing' at that point and allow your prospects to 'pull' themselves towards what it is that they want.

Two heads really are better than one if they work together.

You know when you procrastinate, or ‘put off’ doing your Thing? Perhaps you don’t say “Yes” to something because it might be hard or hard work, or you’re nervous. What are the opportunities you’ve missed because you cheated on yourself and took the easy way out? Or just said “No”?

You don’t need ALL the answers RIGHT NOW

When you’re an ambitious growing business it’s natural to want everything to happen RIGHT NOW, but sometimes it’s better to have only the answers you need NEXT to make sure you’re not missing a step.

Very often there are more people listening, reading, following, watching, and noticing you than you may realise. But too often we can worry about ‘what we see’ and not what we don’t see.

When you are listening you’ll do your Thing in the best way you can.

You know you are the best person to learn from…

My immediate answer to overwhelm is a goal—a very focused, totally connected smaller part of a bigger vision, goal. And a stretchy one too. The numbers I always set myself are never super-comfy but they’re not ludicrous either. If the goal is too far out of reach I know what I’m like—I won’t even bother!

Sometimes (in fact quite often!) I do something not knowing what will exactly will come of it. This is usually when ‘logic’ gets replaced by intuition when I just ‘know’ I need to do something or go somewhere or connect with someone. Always when I do this something great comes of it. It’s not something you can put on your marketing plan I’ll agree, but leave space for it!